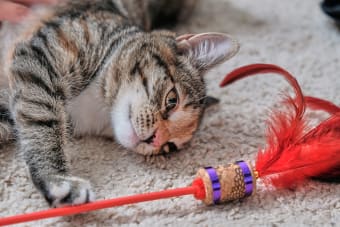 Your cat's health can be negatively impacted by a number of common feline diseases, some highly contagious, while others are genetic or lifestyle related. Here, our Jackson vets discuss some common cat illnesses and symptoms to watch for.

Our feline friends are stoic creatures and extremely good at hiding signs of illness. In many cases, cats will actually hide when they feel unwell. This can make knowing when your cat is sick very challenging. That said, as a pet parent it's important to monitor your pet's health and head to the vet for care if your kitty does begin to show signs of feeling unwell. Below are a few common illnesses seen in both indoor cats and outdoor cats.

Some illnesses are more common than others when it comes to cats, and the illnesses most commonly seen in indoor cats aren't necessarily the same as those seen in outdoor cats. Nonetheless, there are a number of very common cat illnesses that all pet parents should be aware of. Here are some of the most common illnesses that our Jackson vets see in cats.

Viruses and bacteria such as feline herpesvirus and feline calicivirus can cause your kitty to develop upper respiratory tract infections that affect their sinuses, nose, and throat.

These illnesses are easily spread between cats who live in multi-cat households and shelters or those that spend time outdoors where they can encounter other cats. Feline herpesvirus and feline calicivirus are spread through normal activities such as grooming, sharing a food or water bowl, or coughing and sneezing.  Cats infected with the virus can then easily go on to transmit the illness to other cats within the household, or within the neighborhood. Common symptoms of upper respiratory illness in cats include:

Feline Immunodeficiency Virus or FIV as it is commonly called is most often seen in male outdoor cats with a tendency to fight. This potentially serious cat illness is often passed along through bites sustained during fights, although in rare cases it can be passed from a female cat to her kittens.

FIV is a slow-acting virus and in some cases, symptoms may not show up until years after the initial infection occurred. That said, FIV can severely weaken your cat's immune system once the disease takes hold making your feline friend susceptible to a number of serious secondary infections.

With appropriate treatment, infected cats that are kept in an indoor, stress-free environment can live comfortable lives for a number of months or years before the disease reaches its chronic stages.

One very important thing to note is that FIV can be prevented by keeping your kitty's vaccines up-to-date. Speak to your vet to learn more about essential vaccines for cats.

If your cat is infected with FIV symptoms may not become apparent for months or years, or they could be intermittent. If your kitty is displaying any of the following symptoms they may be suffering from Feline immunodeficiency virus (FIV) and require veterinary care as soon as possible in order to help prevent symptoms from becoming more severe.

Common symptoms of FIV include:

If your cat is unable to produce enough insulin to balance glucose levels or blood sugar they will develop diabetes mellitus. Left untreated, diabetes in cats can shorten their lifespan and lead to nerve disorders, numerous health issues, and severe emergency situations requiring immediate veterinary care. Treatment for diabetes in cats is focused on managing the disease rather than a cure and may include insulin injections. Signs of diabetes in cats include:

There are a number of cancers that our vets commonly seen in cats. Cancer first begins to grow within a cell, before attaching to tissue underneath the skin and potentially spreading to other areas. If detected early, cancer in cats may be treatable. Symptoms of cancer in cats can include:

Early detection is essential for good outcomes when it comes to treating cancer in cats. Some other factors which influence the success of cancer treatment include the type of cancer, the extent of its spread, and the location of the tumor. Recommended treatments for cats diagnosed with cancer include surgery, chemotherapy and radiation.

What To Do If Your Cat Is Sick

If your cat is showing signs of any of the illnesses listed above, it's important to seek veterinary care as soon as possible. Many cat illnesses progress quickly and can become very serious quickly.

Note: The advice provided in this post is intended for informational purposes and does not constitute medical advice regarding pets. For an accurate diagnosis of your pet's condition, please make an appointment with your vet.

Is your cat feeling a little under the weather? Our Jackson vets are here to help. Contact Northside Animal Clinic today to book an examination for your feline friend.

We're always happy to welcome new patients to our animal hospital. Get in touch today!

Routine Wellness Exams for Your Pet

Preventive vaccinations and parasite control are the cornerstone of your pet's health.

Northside Animal Clinic is accepting new patients! Our experienced vets are passionate about the health of Jackson companion animals. Get in touch today to book your pet's first appointment.